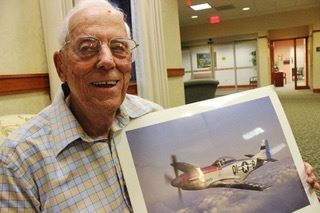 Jim Silva, World War II fighter pilot who spent time in a German prisoner of war camp and later flew 33 combat missions in the Korean War, has been named Grand Marshal of the 2021 Veterans Day Auto Parade. The parade will depart from the Community Center at 1 pm on Thursday, November 11. "Jim Silva is a hero," says Geetha Padaki, Chair of the Town Celebrations Committee, sponsor of the event, "and it will be a thrill to honor him in the town where he grew up."

After graduation from Lexington High School in 1942, Jim Silva "could feel the hot breath of the draft on the back of my neck." After a year studying engineering at Northeastern University, he was accepted for pilot training. Both his older brothers had already joined the military, Joe in the Signal Corps and Ed an aerial gunnery trainer. 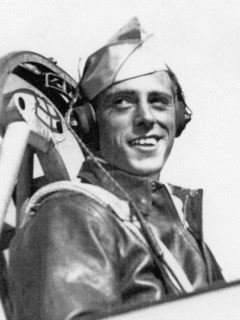 In early September 1944, Jim Silva, a 20-year-old who had never driven a car, arrived in Normandy just after D-Day as pilot of a P-51 fighter plane with the mission of guarding General Patton's right flank as he marched his troops to Paris.

Silva's first mission had a bad ending. Flying cover at 5,000 feet for his partner doing recon at 1,000 feet, Jim's plane was struck by deadly anti-aircraft fire. He knew he had to bail out. Everything went wrong. Thick black smoke obscured all vision. The cockpit was stuck halfway open. He was tangled in his harness straps. He got wedged half in, half out of the plane as it went into a deep dive. Finally, he wrenched free and parachuted safely, barely avoiding contact with the burning wreckage. Within minutes he was captured by German soldiers and taken to a Prisoner of War (POW) camp.

Silva spent two months at the camp, in solitary confinement, sleeping on rat- and flea-infested straw. While he was interrogated often and threatened with death, he was never tortured. "The food was terrible and I lost 15 pounds," he remembers. As a second lieutenant, he was in charge of the 19 other POWs in the camp. When they were released in November 1944, "We walked out of there nice and tall, photographers and brass looking on," he says proudly.

He finished the war flying and testing repaired aircraft and returned home to resume his studies at Northeastern, graduating with an engineering degree in 1950. He carpooled with his future wife, Dot Peppard from Arlington.

A draft notice to Korea cut short his job hunting. Jim spent two years flying 33 missions in a B-26 bomber, crash-landing on his final mission. He flew at night, hitting strategic targets to interrupt the North Korean efforts to resupply troops and ammunition down the Korean peninsula.

With military service complete, Jim and Dot married and after a few years moved to Lexington, where they raised their three daughters: Judy, former director of the New Hampshire Municipal Association; Janet, a retired teacher from Pepperell; and Polly, from Bolton, CT, an academic administrator in higher education. Jim became an Engineering Manager for Sylvania, rising through the ranks and retiring in 1982. Jim and Dot were married for 61 years until her death in 2013.

Thinking back on his military service, Silva says succinctly: "I learned a lot. Had a marvelous time flying. Korea not so much."