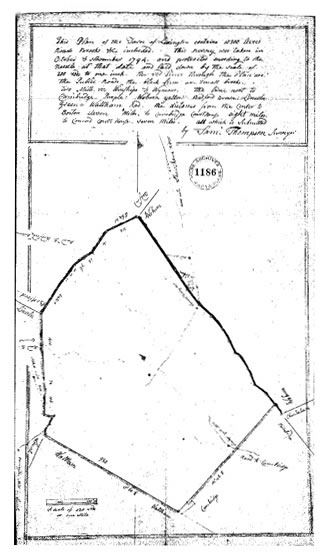 The construction of the meeting house at Lexington Center provided a focal point for future development. As a result, the primary highway corridor shifted from the Watertown-Bedford (north-south) route to the Cambridge-Concord (east-west) route.

In the late 17th century, Main Street (now Massachusetts Avenue) was improved over the Vine Brook causeway and Concord Hill. At the same time, additional roads were established radiating out from the meetinghouse center including Lincoln, Adams, Grove, Hancock, Woburn, and Waltham Streets. Secondary cross highways such as Marrett-Spring Streets and Revere-Hill Streets had also been laid out by the early 18th century.

Commercial development prior to the town's incorporation consisted primarily of taverns and several small mills. Munroe Tavern was constructed in the 1690s while the Buckman Tavern dates to about 1710. Both still stand today and are owned by the Lexington Historical Society.

Few of the town's slow-flowing streams provided any substantial waterpower. The fall in Vine Brook just below where Sheridan Street crosses over the brook provided power for a small grist mill erected by the Estabrooks. The Muzzey family also had a mill on Vine Brook near the main street, about halfway between what is now Massachusetts Avenue and Vine Brook Road.

Clay pits had been established along Kiln Brook (now Bedford Street) by the 1680s. Extensive peat swamps at Great Meadow in East Lexington were harvested during this period for local fuel consumption.

Oak along the edge of the Great Meadow was sent to Medford shipyards. Clockmaking was introduced to Lexington about 1751 by an Essex County clockmaker, Nathaniel Mulliken.

In 1711, a plot of land near the meetinghouse was purchased from Benjamin Muzzey for a public common. In 1713 it was voted to build a new meetinghouse on the land recently bought from Muzzey. Modeled after the meeting-house at Concord, the building was 40' x 50'. Benjamin Wellington was paid four pounds by the town to build a thirty-foot square pound and stocks near the meetinghouse. A holding area for stray livestock, the pound is thought to have been located in the vicinity of the current Hancock Church.

In 1713, the parish of Cambridge Farms became the town of Lexington.

The first public schoolhouse in Lexington was built on the Common in 1715.

By the time of the 1765 state census, Lexington was an agricultural community of 912 residents, living in 126 houses.

Lexington has relatively few dwellings dating before ca. 1770 and not surprisingly, even fewer survive without some alteration or addition. Most of these early houses are simple two-story, symmetrical houses that are five bays wide and a single room deep with center chimneys. Many were oriented to face south for maximum sun exposure in the living areas.

During this period, evidence of an interest in style first becomes apparent. Houses designed in the Georgian style differ from their earlier predecessors in having greater symmetry, double-hung window sashes rather than hinged casements, and sometimes, even a classically-inspired doorway, decorative moldings, or interior paneling.

In the 18th century, the exposure of the wood clapboards was often graduated to provide less exposure near the bottom of a wall than near the roof. It is not known whether this practice was ornamental or was intended to provide greater protection against moisture near the foundation or both.

Now part of the Minute Man National Park, the Whittemore-Muzzey House at 21 Marrett Road dates to 1745 and stands out among other local examples for retaining a sense of its original setting as well as original finishes.

Perhaps the most high-style structure of the group is the Hancock-Clarke House at 36 Hancock Street. Dendrochronology studies of the timbers performed in 2007 indicate that the gable-roofed main house and its gambrel-roofed ell both date to 1737-8. The dwelling was constructed for Rev. John Hancock and his son, Rev. Ebenezer Hancock. Given the sophistication of the dwelling, it has long been believed that John Hancock's other son, Thomas, a wealthy Boston merchant was involved in the construction. The structure was acquired by the Lexington Historical Society in 1896 who moved it across the street. In 1974 it was moved by the Society back to its original location. The Hancock-Clarke House, a National Historic Landmark, is significant for its architectural merit, for its associations with the American Revolution, and as one of the earliest house museums in New England.